Migration over the Strait

The Strait of Messina is the main corridor in the Central Mediterranean for migrating birds. The Strait separates the Mediterranean from the Ionian sea and Sicily from peninsular Italy (Calabria) by only 3 km. The bathymetric profile of the Strait from north to south ranges from 500 to 2000 meters.

Twice per year birds fly over the valleys and highlands of the Aspromonte mountain range, as well as along the coastal reliefs in Sicily. Our watchpoints are located as shown on the map: different sites in Calabria for spring and autumn migration, and one site in Sicily used in both seasons. In spring 2020, counts from Piciò and Solano have been compared in real time to verify that there was no overlap. Therefore, data collected at these two points can be summed up as an accurate measure of migratory passage. 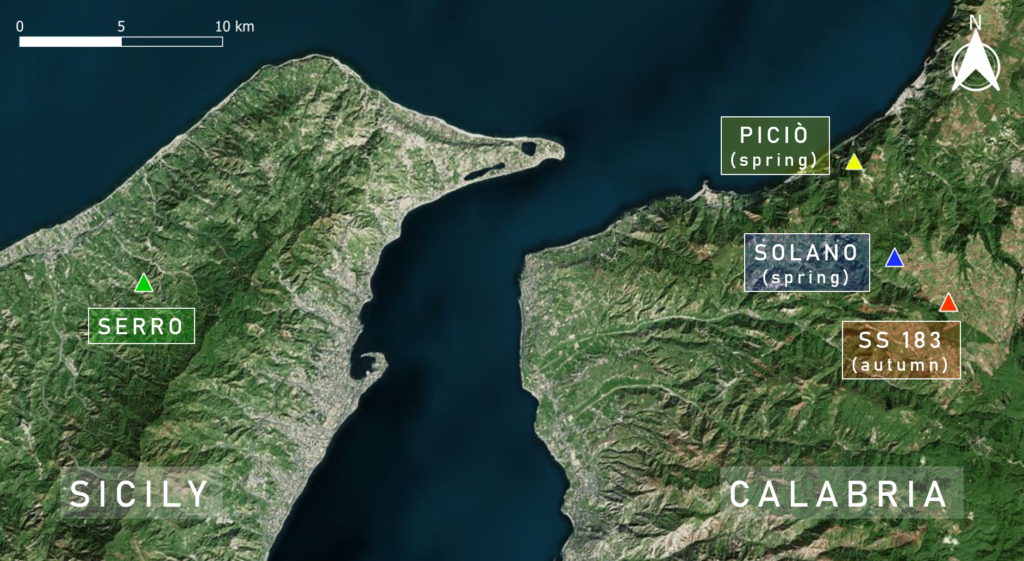 Raptor species which use powered flight tend to undertake long sea crossings using more direct flyways, whereas other species soar: they climb into thermals and glide further away. Honey buzzards are the most abundant species followed by marsh harriers and black kites. These and other species have different migration phenology and counts in spring, when birds move from Africa to Europe to reproduce, are different from those in autumn, when they fly back with their offspring.

Our daily counts are uploaded on Trektellen, a website where ornithological stations from all over the world upload their field observations, as well as bird ringing data, every day.

The Observatory is dedicated to the memory of Michele Panuccio (30/08/1976 – 16/06/2019) who was among the first volunteers fighting the illegal shooting of honey buzzards on the Strait in the 90’s. Nowadays poaching has been drastically reduced and every year the Strait attracts birdwatchers and ornithologists. Michele was a passionate scientist. He was specifically interested in the factors determining migration phenology of raptors, and visited many other watchpoints collaborating with a number of researchers across Europe and the world. The Strait Observatory owes to Michele most of its origins.