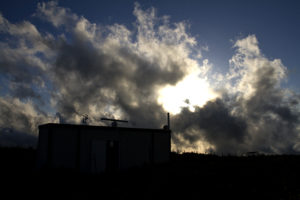 Our radar station in Solano.

In the past years we used bird radars to integrate the data collected by visual observations. These radars are particularly useful to study non-visible migration such as nocturnal migration of passerines, and to monitor aerial bird traffic when fog or clouds reduce visibility. In addition, radars allow to calculate precisely the flight speed, altitude, and direction of single individuals and flocks.

The flight altitude of diurnal and nocturnal migrating birds as recorded by our bird radar.